Most expecting parents fantasise about having a little extra living space for their first child. Ashton Kutcher and Mila Kunis had their hearts set on 7,351 square-feet to be precise. The expansive proportions of their handsome new Beverly Hills home also came with an expensive price tag. The couple reportedly paid $US10 million for the leafy estate complete with three bedrooms, four bathrooms, landscaped grounds and hiking trails just outside their door. Kunis recently told W magazine, “I found the love of my life.” Now the lovebirds have their dream home. 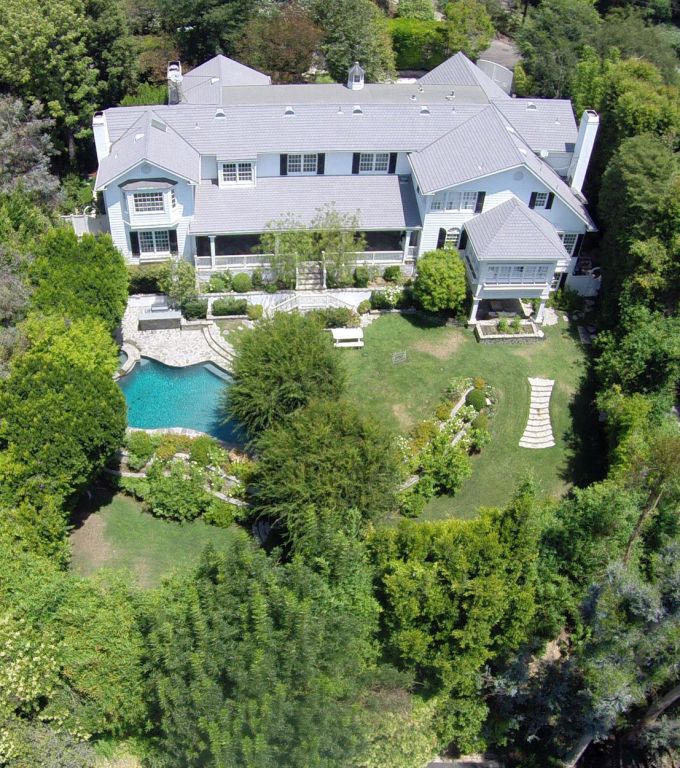 It’s been dubbed “New Beckingham Palace” and certainly David and Victoria Beckham are spending a king’s ransom on their West London residence. The British tabloids report that the couple plonked down £40 million for the historic mansion with eight bedrooms and seven bathrooms, and are spending another £5 million on renovations. Alterations, which were submitted to the local council, include a playroom for their four children, a spacious gym for Becks, and a high-tech dressing room for Posh—with an electric clothes rail to deliver her clothes. The location, near Kensington Palace, underscores the regal theme. 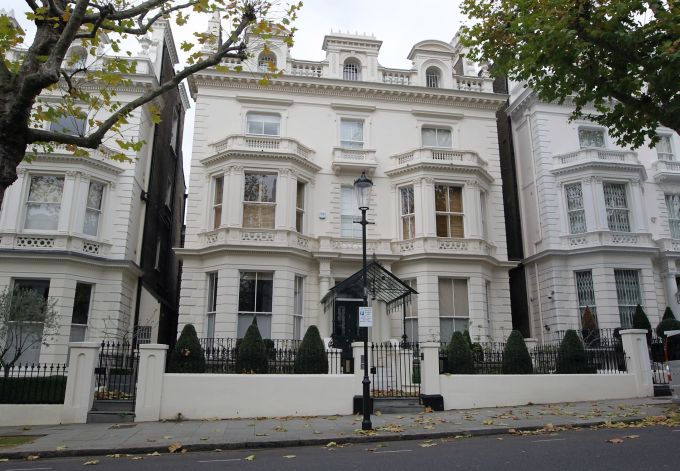 Aerial views of Brad Pitt and Angelina Jolie’s compound in Los Feliz, an affluent LA neighborhood, reveal just how extensive the property is. Pitt purchased the original home for $US1.7million in 1994, and, over the intervening years, has annexed several surrounding houses to form their impressive spread. The latest addition? A skate ramp for their brood of six children. Apparently, 8-year-old Shiloh loves to skateboard. The well-travelled family also owns homes in Italy, New Orleans, Malibu and New York. 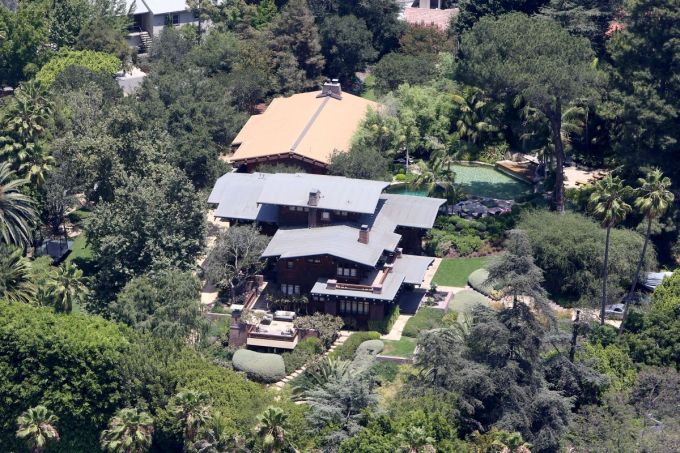 Lightning rarely strikes twice but perhaps it will for the next owner of Forked Lighting Ranch, Jane Fonda’s New Mexico sanctuary. The actress and activist, who has described the house as a “place of significant healing,” recently put the transcendent property up for sale. Asking price: $US19.5 million. The 2,300-acre ranch boasts a massive adobe home as well as several other buildings, a 12-stall horse barn, and a trout-filled river running through the property. Turns out the Oscar-winning actress is also an habitual collector, and much of the home’s dazzling furniture and art is also for sale. 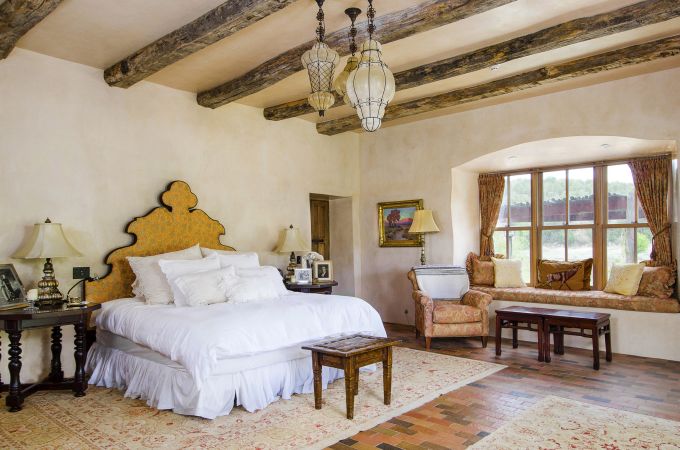 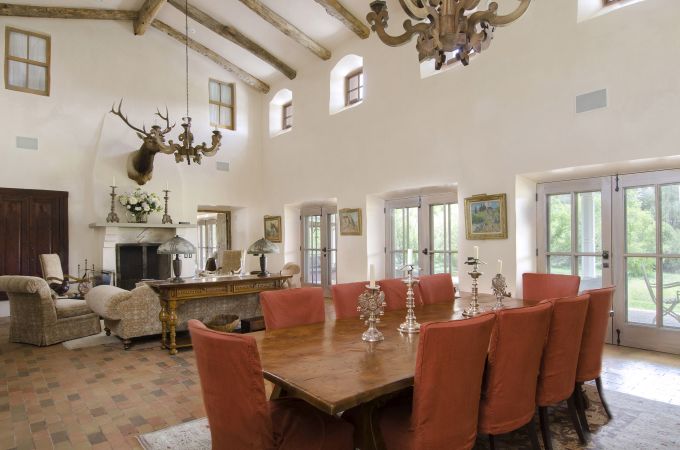 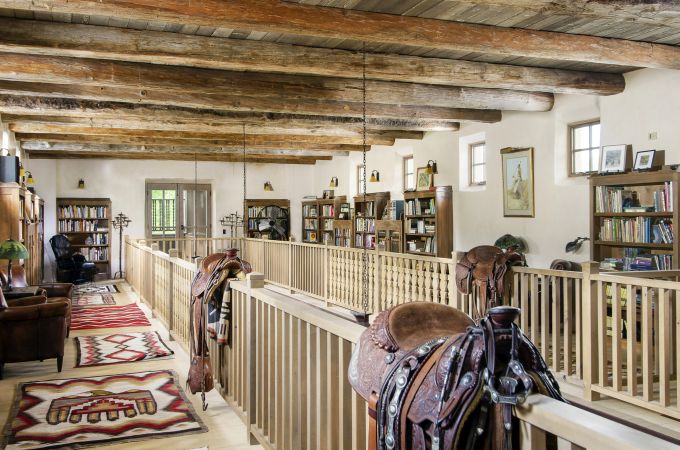 Earlier this year, Reese Witherspoon listed her longtime domicile in a gated community in Brentwood, California. The Spanish-style casa is available for $US10.5 million. An adjacent parcel, also owned by the Legally Blonde star, can be had for another $US3.5 million. The main home has five en-suite bedrooms, including a master suite with vaulted ceilings, as well as ample living and entertaining areas. The outdoor zone has a fireplace, a pool, a spa and a sunken trampoline for Witherspoon’s children. 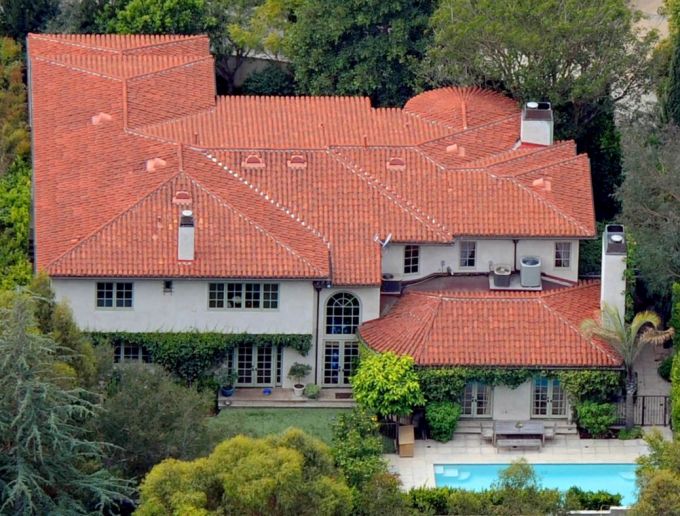 After placing her Pacific Palisades abode on the market for $15 million, Rihanna began renting this $US7 million concrete fortress in the Hollywood Hills. Architect David Lawrence Gray is known for his use of industrial materials, and the home certainly has a Brutalist vibe. The three-level residence is equipped with 40-foot ceilings in the foyer, a high-tech kitchen, a screening room and a gym, and it comes with round-the-clock security. A maze of walkways leads to the external areas, with a guesthouse, a long pool, and a sprawling spa. All up it costs a reported $US60,000 a month to rent. 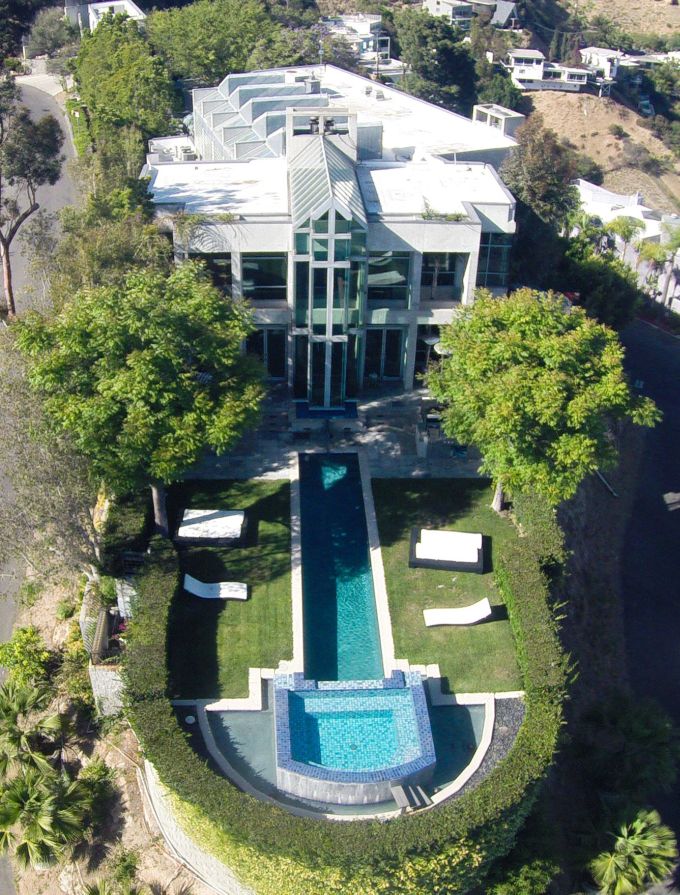 Sandra Bullock is often referred to as a “girl-next-door actress” and, given her propensity for snagging luxury real estate, it’s a mantle she clearly takes seriously. Among her bulging property portfolio is this charming Beverly Hills home purchased in 2011 for $US23 million according to The Los Angeles Times. The two-story house, which sits on four park-like acres, has five bedrooms, seven bathrooms, a library, formal living and dining rooms. The grounds boast 270-degree vistas of LA. Bullock also owns homes in Austin, New Orleans, New York, Tybee Island, GA, and Jackson Hole, WY. 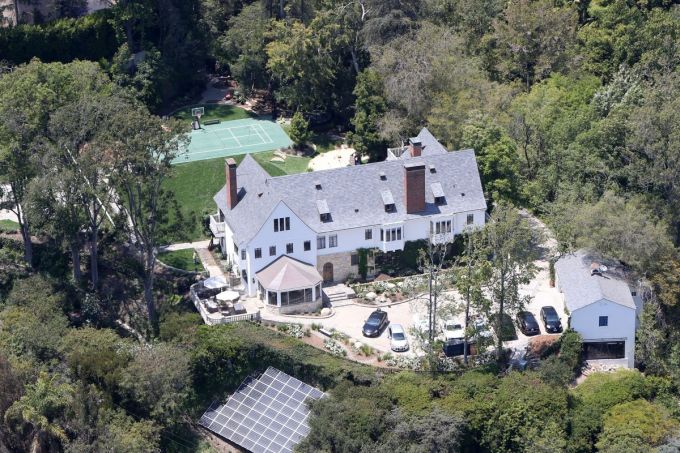 The power couple originally spent $US11.75 million for an open lot in the LA neighborhood of Brentwood, and then invested an estimated $US20 million more for a spectacular custom-built dwelling by architect Richard Landry. They fashioned an entirely new 14,000-square-foot estate with a state-of-the art gym, an oak-panelled library, eco-friendly touches like solar panels and a koi-filled moat. The lavish mansion made the cover of Architectural Digest last year. And they just sold it to music impresario Dr. Dre for $US50 million. The supermodel, quarterback and their kids are relocating to Boston. 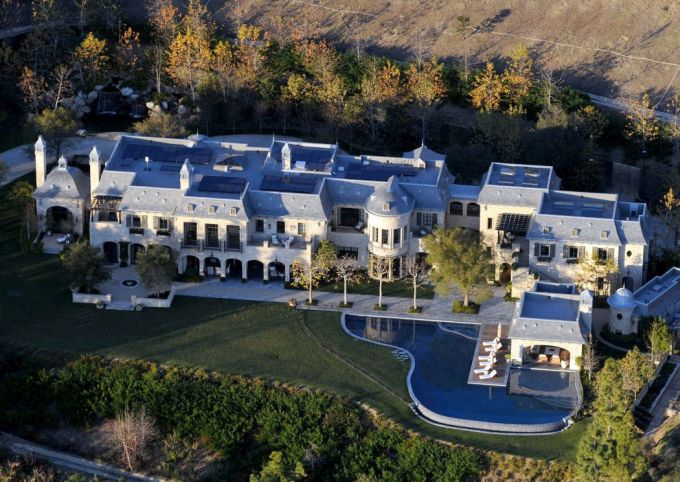 A “modern barn” is how actress Courtney Cox once described her midcentury residence in the hills of Malibu. But perhaps the only rustic thing about the home is its restrained colour scheme, with white walls, dark oak floors and earth-toned exteriors. Cox’s discerning art collection adds character, as do elements like a kitchen window modelled after a food truck for easy access to nibbles during outdoor parties. The luxe compound includes guest cottages, a tennis court, a screening room, a lava-rock fire pit and saltwater swimming pool. Best of all are the uninterrupted views of the Pacific Ocean. 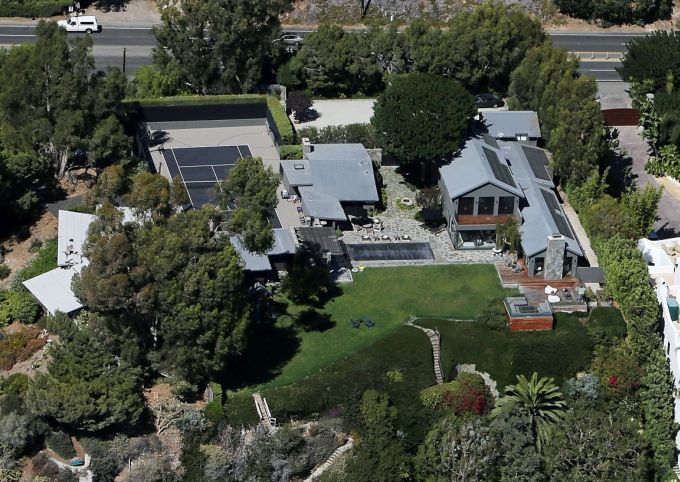 In one of the buzziest real estate deals of the year, Elle DeGeneres recently sold her landmark Holmby Hills home to tech billionaire Sean Parker for $US55 million. DeGeneres and her wife, Portia de Rossi, have a history of flipping high-end homes in Southern California. In January, the couple paid $40 million for the Brody House, pictured, which was built in 1949 and is regarded as one of the top five homes in LA, according to The New York Times. Still, they couldn’t resist selling it. The comedian and talk show host is so enamoured of design she has just launched her own lifestyle brand, E.D., to rival Martha Stewart’s. 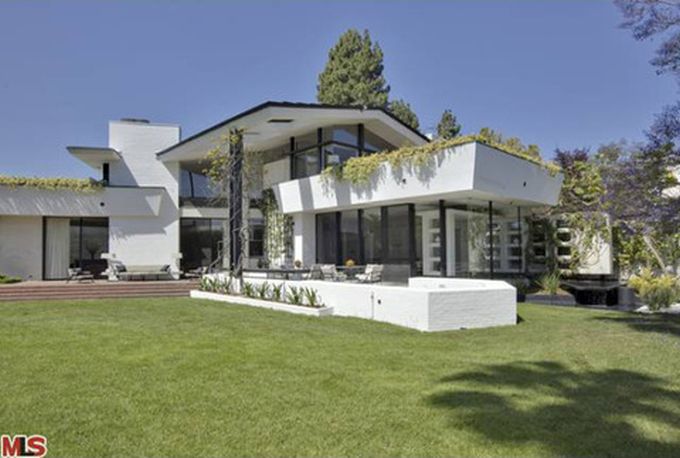 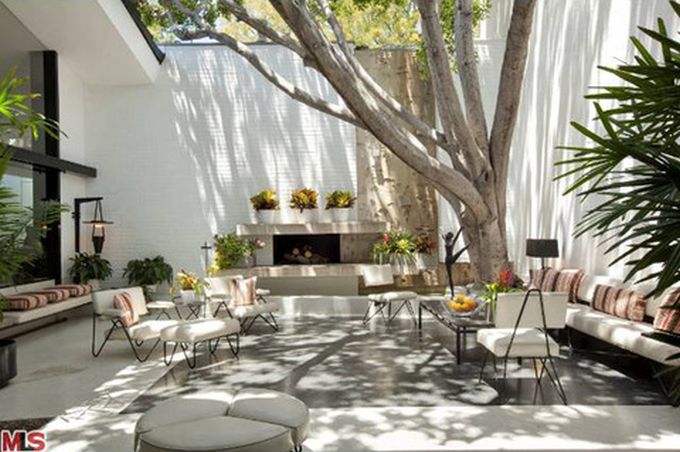 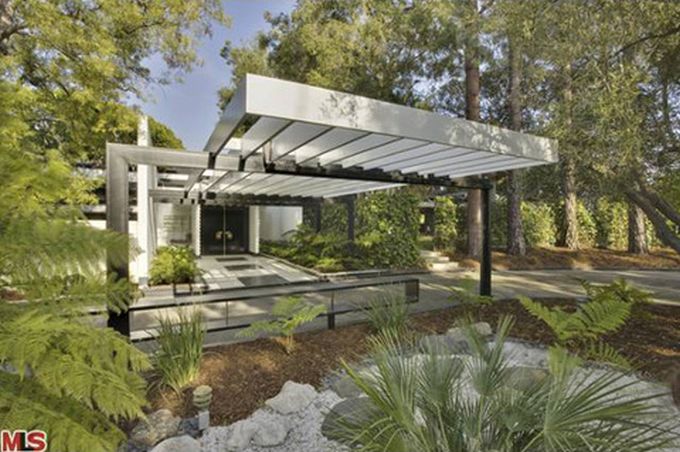